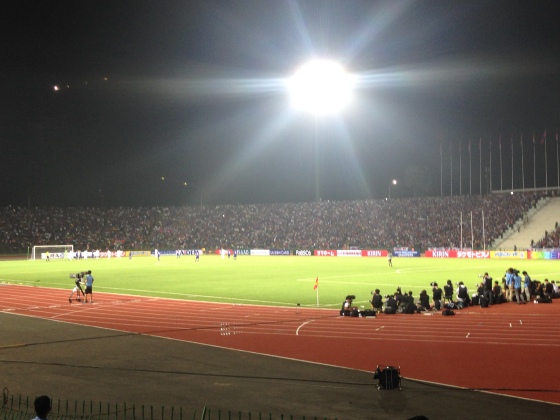 It’s kind of silly really. Last week, we attended a soccer game with some friends. As I was looking out amongst the crowd, my eyes brimmed with tears. I felt ridiculous that I was holding back tears as I scanned the faces around me, all of them caught up in the excitement of the game, yelling and cheering for their soccer team, essentially believing for a win for their nation.

The things I saw during that soccer game were far greater than a simple sporting event. I’ll go ahead and tell you that Cambodia lost the game, but up until the last 20 or so minutes, there was an actual chance they would beat Japan for the first time ever.

There were thousands of people at the game; a miracle in itself because the government hasn’t been too keen on large gatherings lately because of recent political protests. As I looked into the crowd, I didn’t see a nation that has been devastated by a genocide. I saw people, young and old alike, risking to hope. Risking to believe in victory. Risking to yell their hearts out in unison and claim that the best is yet to come.

Awaken and rise Cambodia. Your time is now. The world is watching and waiting for you to embrace who you are. Please keep hoping, and we’ll be here believing right alongside you.